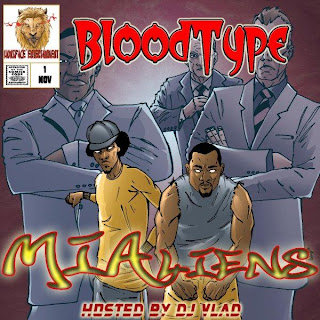 Blood Type is that type of group that makes you fall in love with Hip-Hop again.
Thier new mixtape called "MIAliens" is hosted by DJ Vlad. From the first listen on the lead single "Life is But a Dream" you feel like you have entered the good days of Hip-Hop again where club hits and southern dance rap was not as prevalent as it is today. Please do not get it twisted though because these boys are from the South but they make good southern Hip-Hop music. Instead of simple keyboard production they flow fluently over well produced tracks. The song "Ronnie Romance" is another fine example of what I am talking about. Produced by Stepson, the song has good mellow production and scratching on the chorus which is refreshing to hear and is something that is missing in many songs today!

They do use some industry beats on this mixtape which I am not personally a fan of anymore because I feel artists should not waste time on industry beats and create completely new and original songs all the way down to the music. Even so the group still flows wonderfully showing they are lyrically capable.

Songs like "Live From The 3" really brings out the versatility of this group.
I hope to God Blood Type has a chance to really blow up like they should because it would be a waste of true lyrical talent if they didn't.
Support this group and download the Mixtape and see for yourself.

Artists submit your music to our site by clicking the submit music link at www.hardcorejamz.com